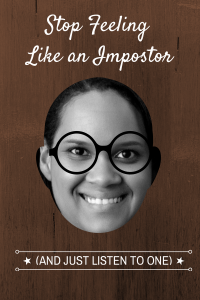 Well, a test proves it. I’m an impostor.

Here’s one of these awesome quizzes where a high score means you “fail.” Ha!

So if you’ve been trying to pinpoint what exactly it is that’s been holding you back in your life or business, I’ve got two reasons for ya.

Number two, you’re not listening to impostors in your life enough.

This all sounds like backwards-crazy mumbo-jumbo, so let’s break it down.

Impostor syndrome (aka, fraud syndrome) is when you find it nearly impossible to internalize your accomplishments.

Even if you have mounds of evidence proving you rock, you still feel like a fraud and you don’t deserve one iota of success. You think you’re deceiving people into thinking you are intelligent, successful, *insert rock star quality here*.

(Case in point, I feel like a fraud for using “iota,” because I learned it in high school English and rarely use it.)

This is an actual psychological phenomenon. I heard about it last year, and now it’s my job to spread awareness about it and kill it. Dead.

Everyone goes through modest periods. We get a bunch of accolades for something and think, “Aw, gee whiz guys. I ain’t all that. But thanks.”

But this is about living every single day like this. You think you’re a fraud on the daily, and everything that’s happened to you is not because you’re talented. You just got lucky. Or you just “knew the right person.”

I have it. You may have it too. And it’s time to overcome. Here are a few ways to salute your own successes.

Keep an “I’m Not an Impostor” file for yourself.

Remember those super-awesome (not really) performance reviews at work? And since you’re a genius, you figured out the best way to walk in to each review steppin’ high is to write down every achievement you ever made over that year? Big and small. Do this now.

I actually have a growing Evernote list of achievements. They come in handy for requested bios and for pick-me-ups if you’re like me and can’t remember what you wore yesterday, let alone how many guest blog posts you’ve done.

This is one of the awesome tips I learned when I dug around about this. Folks who think they are impostors are convinced they’re intelligent because of their achievements in “performance goals” (just like in those craptastic annual reviews) you have to be motivated to achieve.

Don’t think about it that way. Intelligence is fluid and based on a lot of different factors. Remember that every day you’re learning, changing, failing. You may have inadequacies, but you also have strengths, too.

Brain punch the messenger in the face.

Speaking of feeling inadequate, there’s a growing list of successful people who I know to be complete jackholes. They’ve either done so publicly or privately. Business envy breeds feelings of inadequacy. And these feelings are at the heart of impostor syndrome.

So instead of ignoring the jerks, just mentally punch them in the face, and listen to what they have to say any way. If you feel like you need to exact some sort of pseudo-revenge on them, try this:

Read all of your competitors’ blogs, start implementing their tactics and advice in your business and don’t tell anyone.

Don’t give them any word-of-mouth press or web traffic. More than likely they don’t deserve it any way, but that doesn’t mean you can’t learn from them.

If you can’t stand talking to or reading about these people, because you know they actually are total impostors, and talking to them will just make you want to throw something, talk to a colleague of theirs instead and get your knowledge that way.

Feel free to admit why you feel like an impostor all you want. Me, I’m typing this even though I haven’t had a shower since yesterday, and I’m not rolling in clients or cash. But what I am rolling in? Hot knowledge like this.

Talk to me in the comments. Do you feel like an impostor? If so, tell me about something huge you’ve accomplished in the past six months that proves otherwise.

If you caught yourself smiling after reading this, and you need a writer in your business, don’t forget that I’m for hire. Give me a buzz today.

8 thoughts on “Stop Feeling Like an Impostor. Just Listen to One.”